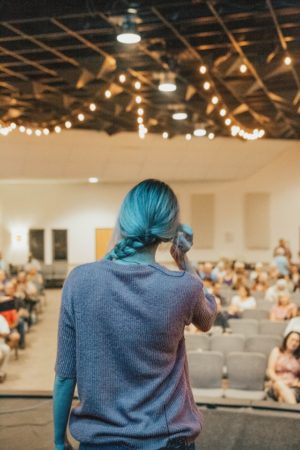 Photo by William Moreland on Unsplash

Have you ever heard of the term “catcalling”? No? Well, here are three possible answers for you – which one is correct?

It is a term used for….
a) …calling a loved female person you feel affectionate towards.
b) …filing a missing cat’s report.
c) …unwanted sexualised, provocative comments directed at women on the streets.

To find out whether you were correct, read the following outstanding speech written by Stella Trost (Q2). Enjoy!

(Photo by William Moreland on Unsplash)

It is a sunny day, the weather seems pleasant, and I am about to leave the house, feeling perfectly comfortable in what I am wearing. But as soon as I step outside the door, I start regretting having put on a skirt. As soon as I walk down the street, I start feeling insecure and pulling my skirt down, fearing it might be too tight or too short. Apparently with no success, though, because only shortly afterwards my worries become sad reality. As I am crossing the street after having left the bus, a truck passes me, honks loudly and the man on the passenger seat turns around decisively staring directly at me.

Now, only four days later, I find myself in a similar situation. I am yet again wearing a skirt, enjoying the lovely weather. I am yet again feeling uncomfortable as soon as I walk down the street. This time I am not being honked at but am met – yet again – with creepy and degrading stares.

Catcalling, as this behaviour is called, ladies and gentlemen, has not only happened to me, but to women who are older than, to women of the same age as me and to girls who are younger than me. Catcalling, however, is only the beginning of a most dehumanizing series of actions against women. It is followed by sexual harassment, abuse and rape.

In fact, only three percent of women aged between 18 and 24 have never had to bear such behaviour. Only three percent… On the counterpart, 97 percent of women from this group have experienced being sexually assaulted in some way. 97 percent! Moreover, 70 percent of women of all ages had to endur such behaviour.
These data are part of the “Safe Spaces Now” campaign by UN Women UK and will be forwarded to the British government and other public bodies to reduce this rate. It also includes a collection of stories and ideas from over 1,000 women and girls to come up with solutions.

Now, this is the farthest I will go as to discussing the specifics of sexual abuse and rape culture, for I am aware that these subjects might be of triggering nature to some of my listeners. I would, however, like to devote a short amount of time to the responses women often receive when raising complaints, accusations or pleadings.

Well, to start with a most dreadful fact, women are not often taken seriously when speaking up against injustices they have faced. In fact, those who reportedly complained about sexual harassment at their workplace were more likely fired than seeing their harasser facing consequences.
In addition, these women are often met with a lack of empathy, disbelief or a certain degree of defensiveness – even leading to the hashtag #notallmen trending on social media as a reaction to the #metoo movement.

Another common response is victim blaming. One of the earliest (at least recorded) instances of this is the ancient telling of Medusa. A story about how the victim of sexual abuse and even rape is made into a men-slaying monster. Furthermore, people often tend to question the women’s lack of consent, reproaching them for “asking for such treatment” by wearing “revealing” clothing or “sexy” makeup.
So, apparently, I, a 16-year-old girl, was asking to be catcalled wearing a skirt on my way to school. Apparently, I was asking to be disrespected and dehumanized, to feel insecure and unsafe. Apparently, I, a 16-year-old girl, was asking to be objectified and sexualised by a stranger.
Unfortunately, this objectification and sexualisation does not seem to come to a stop. Over decades, perhaps even centuries, they have found their way into the media: Into advertisements, literature, music and films. And it can still be found in up-to-date productions.

Now, you might be wondering what exactly was supposed to have changed in the last decades. So, let me ask you: What should we change? If your answer is to wear less revealing clothes, I must tell you it is wrong. Even women who dress “modestly” or who are wearing religious garments are being catcalled and harassed. In fact, they suffer even more from sexual assault than others.
The correct answer is that we must not change anything about ourselves. It is the system that must change. Catcallers must stop demeaning, degrading and dehumanizing us. Harassers must stop objectifying and sexualising us. Because we never asked for it.

Unfortunately, though, we cannot change catcallers’ behaviour. But we can change the narrative. We can reclaim our narratives and amplify our voices. We can support and look out for each other. We can speak up not only for ourselves but for others as well.

Thank you for your attention!