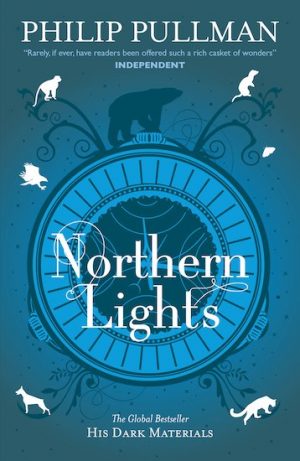 Last term, the class 9c, one of our Fremdsprachenklassen, read the novel “Northern Lights” by Philip Pullman (ISBN: 9781407130224, 7.99 €). It’s the first book of the triology “His Dark Materials”. Here are two reviews of this fantasy novel, a positive one by Rike K. and a negative one by Nikola G.

When I was a child, I always got so annoyed that no character in a book, who was my age, acted, as people of my age would do. Either they acted and thought as if they were little children and their minds were way too young, or they were like adults or did things teens, so many years older than me, would do. I have not found any book that shows a child character at the right mental age, except “Northern Lights” by Philip Pullman.

The novel is about the young Lyra and her daemon who is like her soul, but outside her body and animal-shaped. They go through unexpected adventures after passing a wild and playful childhood at Jordan College in Oxford. Even though this Oxford is similar to the Oxford of our World, Lyra lives in a parallel world with its own past, present and future. Part of the present are the Gobblers, a mysterious group that is connected to many children disappearing. When Lyra’s friend Roger is also kidnapped, she starts her journey to the North, where the main station of the Gobblers is said to be, so she can free him. She travels with canal-faring nomads, the Gyptians. While she gets to know an armoured bear, witches, and many other special characters, she also finds out more about the reason Gobblers kidnap children and its connection to mysterious elementary particles called Dust.

The idea of the story is not completely new; there are many stories, where the protagonist takes an adventurous journey to free someone important to him, for example in “Die Brüder Löwenherz” by Astrid Lindgren. However, I do not remember any story with something similar to Dust and the Gobblers’ experiments. Philip Pullman includes difficult subjects like death and grief, but also the theme of a mix of science, theology and magic, which might not be noticed by children, but makes the novel more interesting for adults too.

What children might not notice either, is how in the end the story questions the morals of every character. Because of the characters being physically so different, like Iorek Byrnison, the warm-hearted armoured bear, the witches and all of the human-like characters of all different ages with their daemons, we have no problems separating the different characters. But what is difficult, is to know who stands on which side. There are not the classical two sides “good” and “bad”. Of course, first it seems like Lyra is “good” and the Gobblers are “bad”. Actually, it is much more complex. We do not know the Intention of all characters and that leads me to the next subject:

Mystery. Most of the time, the reader just gets to know what Lyra gets to know, so there is much more mystery and the reader is forced to read on and on, because he just wants to know the reason of everything. But there are two scenes, where Philip Pullman leads the readers view outside Lyra’s presence, so he knows a thing Lyra does not know and he waits in – good or bad, however –premonition of what might happen to Lyra. These two scenes make it even more thrilling to read.

Next to the main plot, Lyra and the others characters have to survive quite a lot of side stories like Iorek Byrnison’s way back to the armoured bears, so the novel has very complex and never boring story.

Of course not all of the twists are that unexpected, like two important persons, I do not want to spoil you, being her parents, which is very typical and ordinary in the world of books with adventures and mystery. However, most of the time the story turns absolutely unexpected ways, in unexpected moments and for unexpected reasons. For example, I knew Lyra would be saved from getting separated from her daemon, but I never expected the person to save her, that did. It is a great mix of quite expectable turns and surprising twists, so the reader feels comfortable enough to read on, but is thrilled by the actions.

The same mix works for the setting. Lyra’s world is similar to ours with its cities, landscapes and technical inventions, but there are beings, which are just called fantasy at our world, also the exact places do not exist in our world. Nevertheless, we can imagine them as if we knew them because the setting is described very detailed. It creates an atmosphere, which gives each scene its own character and mood. The story would be much more lifeless without the descriptions of the surrounding.

Finally, we will pay attention to the most important aspect; at least it is the most important one for me: The main character. Is it realistic? Yes, Lyra is realistic. She does not act and think like a little, dumb child, instead she takes herself, what she does and what happens around her very serious which is typical for kids. In addition, she is at an age when her mind starts to evolve very quickly and she starts to reflect about herself and the world. We can see her intellectual development from the beginning, when she plays war at Jordan College, to the end, when she still moves on to stand up for what she believes in, even though a person she loves died a few minutes ago. In the novel, there are moments when she is concentrated and serious, but then her thoughts sound childish again. I love that, because when I was at her age, I noticed that on myself too, how the mental age changes from minute to minute.

While reading, I sometimes compared Lyra to the two main characters of “Die Brüder Löwenherz”, which, even if the story is great, is a great example of two characters, that are not met realistically. Jonathan Löwenherz is way too old for his age of 13, and his 10-year-old brother annoyed me because of his childish and fearful mind, all the more if I tell you I was 10 when I read it. Sometimes Lyra is between the mental ages of the two brothers; sometimes she is more like the older or younger one. I really liked that, because it is very believable.

I would definitely recommend the book to any child older than 10 years, any teenager and especially any adult who has problems guessing how children think.

You like realistic books with a lot of romance? Then do not read “Northern Lights” from Philip Pullman! It is the first book of a trilogy, about a young girl named Lyra, who is going on a journey to the North to save some kidnapped kids including her good friend. Northern Lights is about growing up and strong friendship.

You are probably wondering why I started this review so negatively, so let me explain my opinion more closely. I didn’t like “Northern Lights” at all. First of all, the book gets exhausting really fast. I think the reason for that is that the descriptions of some situations or places are way too long. And if you don’t understand some words, looking up the meaning of every single word would take ages. While reading, I forgot really fast what I actually read about ten minutes ago, because I started daydreaming. That was really annoying. I never get to daydream while reading a good book!

A good thing I would still like to point out, is the really nice cover of the book. When I first saw the cover of “Northern Lights” I was kind of motivated to read it. It fits the theme of the book, shines and I like that it is still simple with no big pictures in the middle and you have to look more closely to actually see the shiny pictures. Well, I liked it from the outside but as soon as I opened it my motivation disappeared, as you already know.

Another thing I didn’t like at all, is just as I said in the beginning of my review, there was no good romance and it was way too much fantasy. I guess the story does not contain romance, because Lyra is still a child and romance between children would be inappropriate. But I still missed the romance in the book.

The fantasy part was actually that such a young girl was kind of a hero and through the whole book you get to know creatures like bears or witches while reading about Lyra’s adventures. The main character, Lyra Belacqua, is a typical girl from a fantasy book (in my opinion). No one knows exactly why, but somehow she is special to everyone and kind of a hero, who is going to save the world. Yes, she is a very strong female character, but I don’t think that girls in 9th grade still find her relatable. Kids maybe still believe that one day they can be the one person saving the world with magic, but let’s be realistic. She is the girl most children dream to be, but most girls in 9th grade do not think the way a 5-year-old would think anymore, because they have a more realistic view of the world.

In summary, “Northern Lights” was just a reunification of almost all bad criteria a book can have for me. So I wouldn’t recommend it to people similar to me, but if you are into this type of book you should probably give it a chance. Maybe if you are into fantasy written in 3rd person perspective it could be a book for you, but if you hate fantasy just as much as I do… Please don’t read it! If you would like to read something easier, something funnier. I would recommend “Diary of a Wimpy Kid” from Jeff Kinney. We also read it in English classes and it was an easy book to read. You finished it fast and even got to laugh sometimes.

I would give “Northern Lights” one out of five stars.