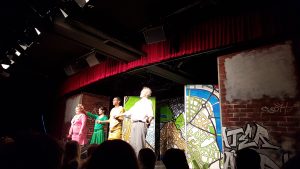 On the 26th June 2017, the classes 7b and 7c went to the BKA theatre. We watched the performance “See You Later Navigator”. It was about two young people who were supposed to solve questions on a TV-show.

The scientist Dr. Quant sponsors the show, because he wants to test the intelligence, the knowledge and the teamwork of the competitors. Dr. Quant and Rebecca Ryan, the leader of the game, choose two teenagers, Maddy and Tom. Tom wears glasses, but Dr. Quant changes the glasses with his brainy glasses, which were invented by himself. The glasses make Tom clever, so he knows all the answers. Tom and Maddy don’t know this and Rebecca Ryan slowly becomes suspicious …

by Lina and Neele, 7c